Kennedy energetic to save planet

THE CITY: Robert F. Kennedy Jr. will be in London Wednesday to discuss environmental advocacy and alternative energy projects

Time magazine dubbed him a “hero for the planet.” Rolling Stone magazine named him one of its 100 “agents of change.” And he’s routinely referred to as a “champion of the environment.”

But that doesn’t mean Robert F. Kennedy Jr. thinks every alternative energy project should get a rubber-stamp vote of approval.

“Just because it’s so-called new energy or good energy doesn’t mean it’s not going to cause injury,” Kennedy says by phone from Colorado. “I don’t think that just because it’s wind or solar (energy) that local objections should be dismissed.”

Scheduled to speak Wednesday at the University of Western Ontario, the son of the late Sen. Robert F. Kennedy has built an impressive career out of his environmental advocacy.

Chief prosecuting attorney for the Hudson Riverkeepers, senior attorney for the Natural Resources Defense Council and president of the Waterkeeper Alliance, Kennedy is also a partner in VantagePoint Ventures Partners, which has invested in about two dozen “clean tech” companies, including a Massachusetts-based firm marketing a wind turbine based on jet engine technology.

So when I tell Kennedy how some residents near Strathroy objected to a proposed wind farm there, citing worries about headaches, nausea and rapid heartbeats, I expect him to dismiss such concerns out of hand.

But Kennedy is far more circumspect.

“There are lots of places where there’s wind, but not every place is suitable for wind farms,” he says. “It’s better than most kinds of large-scale industrial energy production, because it doesn’t produce carbon, it’s cheap and it’s got a relatively small footprint. But there are issues with it.”

Kennedy says he has spoken out, for instance, against a wind farm being built off Cape Cod, because the turbines would interfere with the local fishery.

END_OF_DOCUMENT_TOKEN_TO_BE_REPLACED

Answers to our questions? Now I just have more questions.

At the wind proponents public meeting we were handed out comment sheets to fill in. I filled my comment/question section with just ‘questions’ for TCI/NextEra. Below are the responses I received from the Adelaide project development manager, Mark Gallagher.

1.     What recourse do the residents of Adelaide-Metcalfe Township have if they do become ill from the wind project, their property values plummet, and they cannot afford to move?

2.     How will you mitigate 10km of intense shadow flicker on the highway 402? How will you respond when accidents occur?

3.     How will you monitor and control noise made by your wind turbines?

END_OF_DOCUMENT_TOKEN_TO_BE_REPLACED

Mcguinty: What gives your government the right to ignore voters in rural and small-town Ontario?

Mr. Jim Wilson: My question is for the Acting Premier. On Monday night the council of the township of Clearview voted unanimously in favour of asking Premier McGuinty and his government to put a moratorium on new wind developments. Some 50 other communities in Ontario have done the same, including Grey county, the city of Kawartha Lakes and, in the Acting Premier’s riding, in Prince Edward county. So I ask the Acting Premier: Will the McGuinty government respect the decisions of these local councils? END_OF_DOCUMENT_TOKEN_TO_BE_REPLACED

Sign the petition below to let Mr. McGuinty know that we want Mr. Marin to remain as the Ontario Ombudsman.

Although this project isn’t in Middlesex, I think it is important to know about projects that are close by so that we can spread the word to our friends and family that live in that area (Alvinston, Newbury, Bothwell).

Below is some more information on the ‘Sydenham’ wind project. Please pass on to anybody you know in this area.

Mainstream Renewables’ website for this project in Sydenham: www.SydenhamWind.com .

I was glad to hear the Brooke-Alvinston mayor say that the safety and health of the residents comes first, on the MyFM Strathroy website.

The Birds that we have are not just starlings.

It’s hard to believe that there are so many ‘senior biologists’ involved with the construction of wind turbine projects. With at least 3 years in academic study of ‘natural life’, I would hope they would be sensitive to their surroundings and how man can quickly alter the habitats for other species. But perhaps many of these wind employees can toss aside all that they were taught, because their pay cheque simply depends on them not seeing and believing the destruction that wind turbines create. 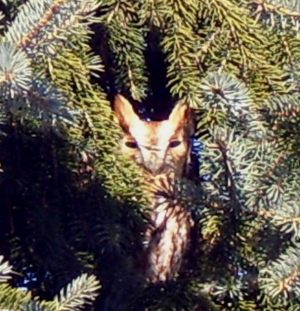 Our area is always dismissed as being ‘agricultural’, with little in the way of significant species. Public meetings put on by the wind companies usually sum up our wildlife with a large photo of a house sparrow. That is apparently all that we have, or all that we are supposed to believe that we have. unfortunately for the wind companies, we LIVE here 365 days a year and get to witness so many more species then their bird man did, who was only around for a couple days or so.

Diane McGuire from Cuddy Drive, NE of Adelaide Village, writes this about the above snowy owl:

Here may be some of the last photos I’ll ever get of the snowy owls  in the field by our home.  Once the wind turbines are up, these magnificent birds, will no longer return.  We also have had many short eared owls living in our hedge row (up to 7 at once one year).  Just this last week, we had a screech owl in our front spruce trees.
Just another reason for the damn turbines not to be erected. It breaks my heart!  My children have had the opportunity to observe and learn about these great birds first hand, not from a text book.  The extinction list may be all that will be left for these birds and many other animals if the government has its way.
I urge Mr. Milligan and all of our council to stand up and do the right thing – STOP the turbines!!”