Year of the Turbines, Part Two
(read Part One)
by Eric Nixon, Hayter-Walden Publications
“Dec 17: Early AM. Neil not sleeping well, me neither.” Monica Elmes wrote those words in her diary back in 2010. It wasn’t until some time later that she realized what had happened the previous day outside her home in Chatham-Kent. After years of preparation and close to nine months of construction, Enbridge Inc. had flicked the switch and started 44 powerful wind turbines turning near the Elmes household. Lack of sleep was just the first symptom for Elmes and her family.

“To me, the visual intrusion is huge but, also, when they started to function, the noise intrusion was way more than I ever thought. When I first saw the map and saw where we were located, I thought, ‘Oh, good, we’re 1.5 km away from the closest one,’” says Elmes. She almost let out a sigh of relief at the time, not expecting the noise would be bothersome. Nothing could be further from the truth. Noise levels today with the turbines operating are often ten times what they were before.

And noise was just the beginning. For the first time in her life, Elmes began experiencing painful earaches. “It was kind of a definitive moment for me when I realized,” she says. At first, she didn’t equate the turbine noise and the ear discomfort. But, one day when the turbines stopped, her ears started popping and crackling – and she realized the increasingly worsening ear pains were being caused by the turning blades.

One of the problems so many people have with turbines is that they’re intermittent and unpredictable. Elmes says, “It’s incredibly variable. There’s times when it’s fine, other than visually. There are other times where it feels like something’s beating you over the head.”

Elmes is fortunate that she’s mostly susceptible only to health issues associated with the audible noise from the turbines. Her spouse, Neil, is a completely different story. “My husband is the one I worry about more, because he seems to be sensitive to what I would assume is non-audible low-frequency noise, so he doesn’t sleep well anymore.” END_OF_DOCUMENT_TOKEN_TO_BE_REPLACED

Monica Elmes: Before the turbines – Part 1 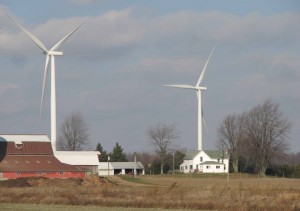 Year of the Turbines, Part One
by Eric Nixon, Hayter-Walden Publications
This is a story about one woman and her family. Average people, like most of us. It’s about how their happy, rural lives changed dramatically beginning a few short years ago. About how they were transformed from contented farmers into faceless people who feel trapped in their own lives. It’s a story of what happened when wind turbines changed everything. And it’s a story about how people’s lives in our communities are about to change, too, with the proposed installation of up to 400 turbines right in our own backyard.

Monica Elmes lives in Chatham-Kent, about an hour or so south of here. She and her husband Neil have owned a small cash crop farm just south of Ridgetown for the past 17 years. She’s an intelligent person who studied Science and Agriculture and worked as a research technician for the University of Guelph and Ridgetown College. Slightly more than a decade ago, she and Neil decided to have a child and she’s been a stay-at-home mom ever since.

Until a few years ago, she described her life on the farm as ‘fabulous.’ “We bought our property and farm here planning to never leave, have done extensive renovations and everything we can with the view that this was where we were going to live and die forever – and absolutely loved this place,” she says.

That’s what got her excited about the idea of wind turbines in the first place. About six years ago, there was a lot of talk in her community through the grapevine about people wanting to lease to wind companies – and the couple were definitely interested. At the time, crop prices were really bad and they were intrigued when a group of local residents approached them: “They thought if, as neighbours, we could get together and form sort of a group to approach the company, it would be beneficial for everyone to have that sort of power position, kind of a cooperative, community thing,” she says. “A lot of people – ourselves, as well – we thought this would be a good thing for the environment – and an opportunity to make money at the same time.” END_OF_DOCUMENT_TOKEN_TO_BE_REPLACED

Brooke-Alvinston– I’m sorry. I wish the wind companies and the Ministry of Environement were too.

And for those who need to know the differnce between a ‘windmill’ and a ‘wind turbine’ – the photo below and 500′. 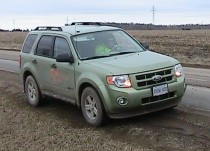 As for the company “RES” (Renewable Energy Systems), whos name is on the sign at the Zephyr entrance, and on the little green hybrid SUV “Escape” slipping around on the self inflicted muddy roads (hard to ‘escape’ the traffic jam)…

This is the new resident groups name for victims of the Talbot Wind Project near Ridgetown: F. U. RES (Fed Up Residents).