WARWICK: Mayor frustrated with lack of communication and common sense in planning 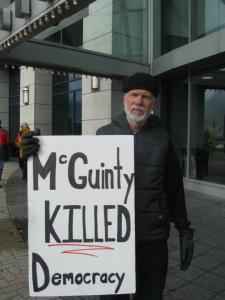 Paul Morden, Sarnia Observer
Plans for up to a dozen wind turbines in Warwick Township have Mayor Todd Case feeling frustrated. Nextera Energy is holding the first of three public meetings about its 150-MW Jericho Wind project at Centennial Hall in Watford Feb. 6, 5 p.m. to 8 p.m. The community hall sits a few kilometres south from where the mostly Lambton Shores-based Jericho project spills over the border into Warwick.

Case said there has been a serious lack of communication from both Nextera Energy, and from the Ontario government. Warwick’s council voted earlier in November to call on the province to deal with a list of the township’s concerns and objections about its Green Energy initiative.

“The common sense in this whole equation seems to have gone out the window, quite some time ago,” Case said. “It seems here in Ontario we’re just going to keep marching forward and we’re not going to consider all the facts.”

Nextera released a map earlier this month showing 97 proposed sites for up to 92 Jericho Wind project turbines it wants to begin operating in 2014. Warwick has joined other Ontario municipalities calling for a moratorium on wind farms until a federal health study can be completed. END_OF_DOCUMENT_TOKEN_TO_BE_REPLACED